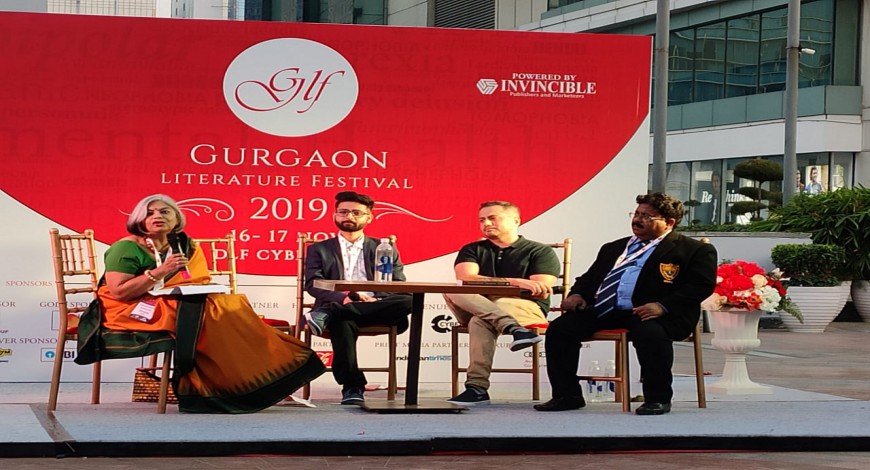 Gurgaon Literature Festival, the flagship literary event on art and culture rolled out its second edition from 16th to 17th November 2019 at Amphi Theatre & Aditya Birla Arena in DLF Cyber Hub. In its second edition, this renowned literary conclave brought together hundreds of giants from all around India. Mental health, depression, addiction in art and literature were the recurring topics and overall theme of the event to create awareness about mental health problems. The chief guest of the event was Mohammad Kaif and DGP Haryana Manoj Yadav.

The series of events encompassed book launch which was followed by expert panel discussion leading to the award ceremony. The book launch event was carried forward by Manoj Yadav, Haryana DGP at 1 pm. Among other books, Daggers of Treason by Niraj Shrivastav secured the esteemed opportunity to be launched at the Gurgaon Literature Festival. Prior to the event, the DGP threw light on the thin line connecting the working environment of police and mental health associated with it.

Followed by an expert panel discussion that took place at 5 pm and The Session on Is mythology actually history? Arjun Raj Gaind, Niraj Srivastav, Antar and Sutapa Basu were among the speakers. Both of the days the GLF witnessed crowd from all across the NCR and other parts of the nation.

After the panel discussion, an award ceremony was conducted at 6 pm dissipating a token of appreciation to all the deserving candidates where Niraj Srivastav won the Best Historical Fiction award for his book Daggers of Treason. Daggers of Treason is a historical fiction novel, based on the life and reign of emperor Khurram Shahjahan. One of the four-book series titled ‘The Curse of the Mughal Series.’

The event was conducted with great pomp and show as it witnessed the coming in of enthusiastic crowd who had a great inclination for art and literature. People who attended the event were greatly inspired by the plethora of perspective and consciousness a cultural event like this could instill in oneself.