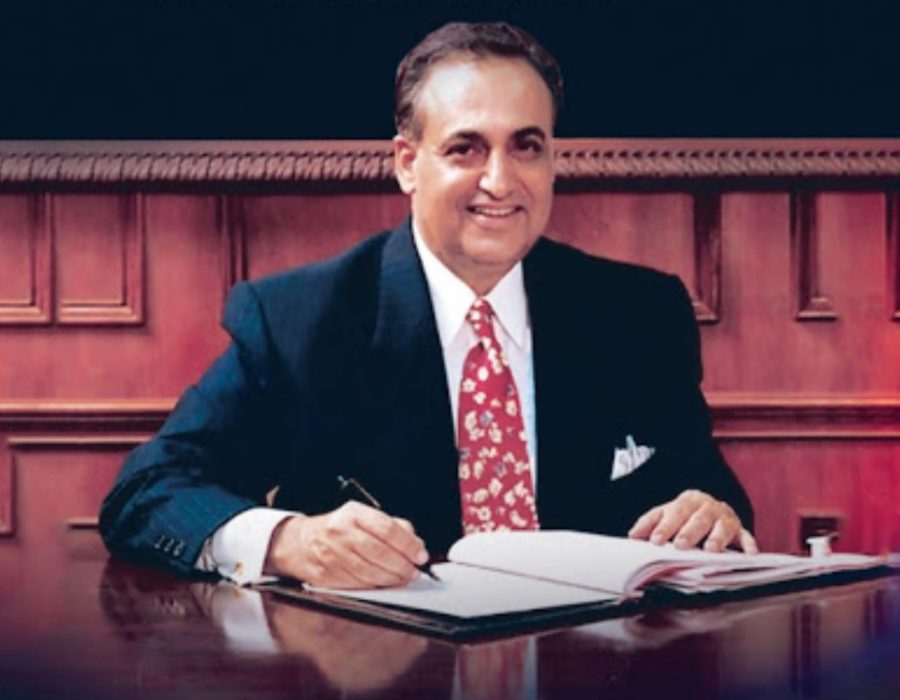 Mr. Ravinder Nath Khanna, Son of the Late and Hon’ble Mr. Justice Prem Nath Khanna is a first class Honours Graduate in Electrical Engineering of the year 1962, from the prestigious IIT Kharagpur, the one and only IIT till then in India. Having qualified in the German Language also in the final year he was Campus selected for the job of a Trainee Design Engineer in Germany. He is the Founder of the Controls & Switchgear Company as we were originally known then, which he founded in the Car Garage of his father’s old house at 25 Rohtak Road, New Delhi on the 28th of January 1966 at his age of 26 on his return from Germany, where he had gained extensive experience over a period of three years working as a Design Engineer with Metzenauer & Jung Gmbh Fanal Wuppertal West Germany. He is also a Gold Medalist and a Distinguished Alumnus of the IIT Kharagpur of the year 2006.

Such was his vision, determination and the knowledge gained besides his own passion for Entrepreneurship and deep love for his own Country, that after only three years of gaining the requisite on the Job experience in Design, Manufacturing and Commissioning of LV & MV Switchgear products, Equipment and Systems, he boldly chose to resign from his lucrative job in Germany. This enabled his return back to his Roots in India by October 1965 giving birth to his new start up. Initially he invested his own bare minimum saving of Rs. 10,000/- only still left in his pocket out of his Earning in Germany after paying for the lowest available Sea Fare for a 14 days long memorable journey on The French Ship The Cambodge from Marseilles on the Riviera to Bombay India and by Train back to New Delhi duly accompanied with Wooden Crated essential Testing & Measuring Tools, elementary jigs & fixtures in addition to several of his self-made drawings sketches and dossiers used by him in Germany. All this had thoughtfully been preplanned by him to give a quick start first with the manufacture of custom made process and automation Switchgear for the machine tool and the process Industries matching the highest quality standards he had learnt overseas, from day one, back home then in India, as well.

Early in 1975 he was awarded by the President of India a Tamrapatra Recognition for achieving excellence as a First Generation Indian Entrepreneur.
In the year 2001 Tata Mcgraw Hill in their “Book on Role Models and Thought Leaders On The Horizon of Indian Industry after Independence of India” in 1947 Recognized him among 21 others only from All Over India for their unique Contributions in Entrepreneurship and Skill Development in India.
In the year 2004 on account of the recognition of his wide Experience and Exposure to The Hannover Fairs and most other Electrical Fairs in the World he was unanimously elected by IEMA representing the Entire Indian Electrical Industry as the Chairman of Elecrama 2004 with a Mission to bring our Indian Elecramas at par with International Standards, Scale and Recognition, a duty that he lead admirably as recognized by the Industry.
In 2005 and 2008 respectively he was also honoured with the Udyog Ratna Awards for Entrepreneurship by the Governments of Uttaranchal and the Union Territory of Delhi.

In 2008 he was also conferred by His Excellency the Former President of India – Shri Pranab Mukherjee with the Life Time Achievement Award as The Industrialist of the Year 2008 by the PHDCCI for his valuable and unique Contributions to the Indian Electrical Industrial Sector as a first Generation entrepreneur.

In 2013 he was conferred with the COSMA Ratna Award for being the most successful First Generation Entrepreneur in the Electrical Engineering Industry of India. He is widely recognized in the Indian Electrical Industry for his invaluable services and contributions by successfully spearheading the Made in India and Skill India Labels well accepted and respected all over the World today.

In the year 2016, recognizing his vast and successful Entrepreneurial Achievements, he was conferred with a Doctorate in Entrepreneurship by the International University of South Korea.

As the President of the Okhla Industrial Estate and as a well recognized Technocrat in India, he was actively involved by the DGTD & The Ministry of Heavy Industry in the 1980-1990s for upgrading the Syllabus of the Industrial Training Institutes in India for more intensive and focused skill building in Industries at large in India.

He was also elected by FICCI as the Chairman of its Indo Spanish & Indo Portuguese Joint Business Councils for which purpose he toured and lectured extensively to Promote Investments in India. Our own Joint ventures then with Himoinsa Spain and Effacec Portugal are only small outcomes of a Larger All India Exercise covered then.

His recent Book ‘Garage to the Globe’, equipped with A Simple 51 Success Mantra Toolkit, duly unfurled and formally launched at the International Book Fair 2020 in New Delhi as also at the Recently held Elecrama 2020, is primarily intended to serve as his Return Back with Gratitude to The Industry and The Society by way of presenting A Ready Reckoner dedicated to inspire a new generation of Startups, Entrepreneurs and Aspirers in India and around the World today.