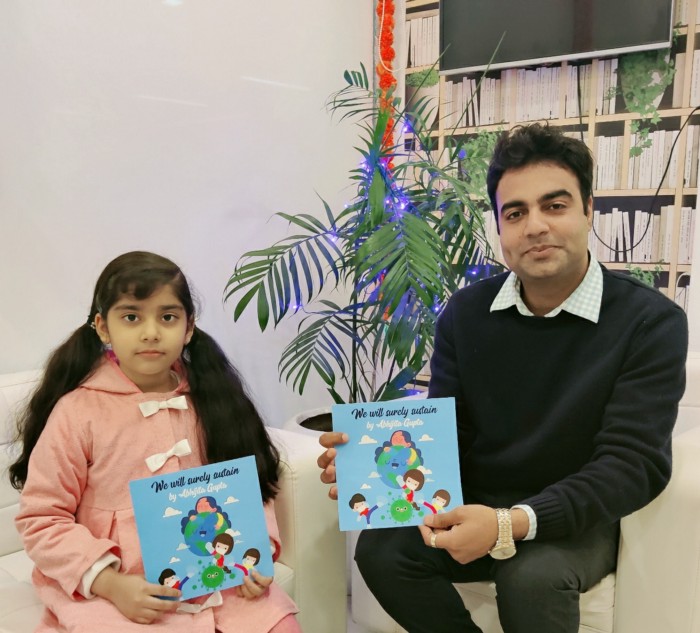 Abhijita Gupta, the third generation of poet duo Rashtrakavi Shri Maithalisharan Gupta and Santkavi Shri Siyaramsharan Gupta, is the youngest writer in the world. Her debut book ‘Happiness all-around’ received great appreciation, and she has been recognized as the world’s youngest writer by the International Book of Records. The Asia Book of Records has awarded her with the title of the ‘Grandmaster in Writing.’

Abhijita with her love for writing has decided to publish more of her work and has signed a four books contract with the publisher of her first book, Invincible Publishers, the leading and largest publishing house in India. As an appreciation for the efforts and dedication of the little prodigy, Invincible Publishers gave her an advance royalty cheque of 10,000 books.

Ajay Setia, MD Invincible Publishers said, “We are pleased to publish the work of world’s youngest writer, Abhijita. She is a blessing for her parents and we wish her all the best for her bright future.”

She is the first child from India to have signed a book deal and the book cover of her second book is released as well. Abhijita is an inspiration not only for the children but also for the parents, giving them an insight into how a young mind works. With her beautiful writing style, it is certain that she will achieve great success in the future.

Author Swati Sharma, who was present at the time Abhijita received her cheque, opines, “Abhijita is a bright child and has a wonderful future in the literary world.”